I never thought I'd ever have a blog, I hadn't really ever thought about it except to think ... "why would anyone do that? and who would read it?"

But in 2010 as I started working on my garden, I started journaling for myself the process... which is very unlike me. But I did it in Word, in private, just for me.

Then, my dear friend Cari who lives WAY too far away (I know... it's my fault... I'm the one who moved) and I decided to raise chickens this year. We didn't plan it together, it just happened that we both were doing it at the same time. I don't think we'd ever even talked to each other about wanting chickens. I know I wanted to get some last year, but the timing just wasn't right. My husband, Joe, was running for public office, our business was in major growth mode, then we decided to sell, then the economy took a nosedive, and the chickens had to wait. 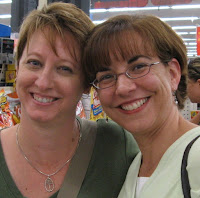 So as we began the chicken process together, and I began to deluge her with pictures, and videos, and emails of every cute thing my baby chickens did every single day, she said "Tammy, you should start a blog". Normally I wouldn't have even entertained the suggestion, but I was already in a writing mode. And even though it's very likely that Cari and I will be the only ones reading it, it's ok because I'm doing this for us.
Now, lots of gardening and chicken coop things have happened prior to the chickens arriving, so I may, at some point go back in and add that process too. But for now, I'm just picking up at the beginning of chickens.
And, Cari, this blog's for you! Love ya...