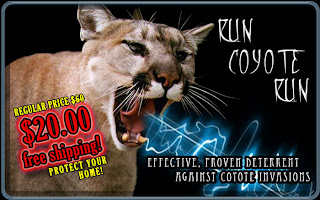 I ordered one, installed it under a bush right next to the hen house, and put it on continuous play. Don't worry, I warned the neighbors! It can definitely give you a jump start when you're outside at night and one of the loud, random sounds comes on out of the blue!
The first time the chickens heard it they just about beat each other up to see who could get in the hen house first! The next few times weren't as dramatic (except for Ingrid, she's a little skittish). Most of them just froze in place until they were sure it was safe to move. After a few days, it didn't phase them at all.
It has been running 6 weeks now and, while I do hear the coyotes in the distance, I haven't seen another one in my yard! If you're having coyote issues I'd say this product is definitely worth a try.
Posted by Tammy at 11:17 PM