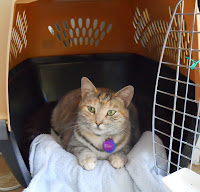 This week it cooled WAY down. Tuesday night dropped to around 36 degrees. I covered the cat carrier with a comforter to keep the heat in and installed the heat lamp in the hen house for the chickens. It was only below 40 degrees for two nights. It's already starting to warm up again. The cherry tree had already dropped all it's leaves for winter and has now started blooming again like it's spring!
Posted by Tammy at 11:31 PM