My neighbor scoffed when he found out I was planting watermelons this year. He said they just won't grow here. It was a rough start, but one of the plants finally took off after a couple of months. And then... it appeared! I was amazed at how quickly it grew from day-to-day.

The first photo, it's about the size of a peanut. Four days later, it's the size of my hand! 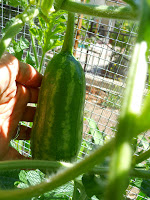 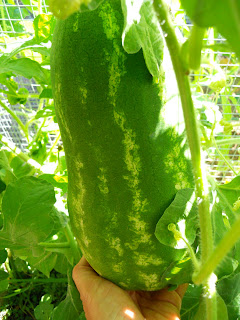 Six days later, it's still growing fast and getting pretty heavy. After this, the growth seemed to slow down, but it continued to ripen.
I wanted to wait until it was fully ripened to harvest, but when I noticed teeth marks in the rind I figured it was getting close to time to pull it. I decided to wait one more day...

I was very excited to pick my first watermelon! And then the disappointment set in. The missing chunk of melon was not my doing! So much critter damage in one night. As if that weren't bad enough, the melon wasn't nearly ripe.﻿ Fortunately, the chickens were happy to pick all the seeds out of it, so all was not lost.
Posted by Tammy at 1:00 PM