Yesterday was another good tomato harvest! To-date, I've harvested about 4 pounds of tomatoes with LOTS more in progress. This morning was a sad tomato harvest day. Apparently, the rats found a way in and demolished 5 large tomatoes that were supposed to be mine today. So I harvested 3 nearly ripe tomatoes to let them finish ripening on the windowsill. The girls got 2 of the partially eaten tomatoes for breakfast. They were very excited... maybe they're in cahoots with the rats! Naahhh. I saved the other 3 damaged tomatoes for the hens to have tomorrow.

The two cantaloupes on the vine are now a little larger than a Nerf football and there are more baby fruits just starting out. I've tied up each of the larger two in a pantyhose sling to support the weight since they are growing vertically. Guess I should take a photo of that!

Two watermelon vines have taken off and are expanding rapidly. One has started to show fruit. They're about an inch and a half long. Very exciting!

The one cucumber vine that survived now has at least 7 good sized cuks in progress. Plenty for Joe with some left over to share with the neighbors.

Earlier this week I went to harvest the first red bell pepper. It looked beautiful from above. But when I cut it, it had a hole in the bottom and had started to shrivel. Bummer! Today, I decided to harvest the red bell pepper that had just started to turn color. I needed a green pepper for our dinner recipe and after the tomato massacre; I didn't want to risk losing another pepper to critters. 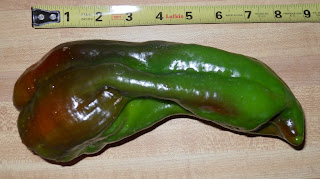