I've fallen out of love with Victor. It's been 2 nights and his traps are not working for me. But seriously, what am I supposed to use to lure a rat/mouse into a spooky looking trap with all these gorgeous fruits and veggies dangling out in the open?


The field mice are still getting into the big garden. How, I'm just not sure, but I am positive they are getting in. Last night I tried putting additional "treats" outside the perimeter of the garden. My next door neighbor had lots of ripe peaches with bite marks in them. So I gathered them up and placed them around the outer edge of the garden. Several were definitely missing this morning, but so were the bottoms of 2-3 more tomatoes!
Well, that's it. As much as I hate to cut tomatoes before they're red, I'm cutting them anyway. If the choice is "cut them while their green and let them ripen in the window" or "lose 50% of the crop to critters", I'll cut them early. I now have an estimated 7 pounds of tomatoes ripening in the window. I harvested everything that had a hint of blush to them. 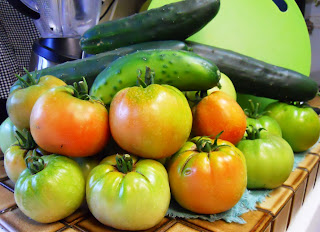 The cucumbers are also doing well. I harvested 4 today and shared with the neighbors on both sides of us. There are several more still growing. Only one had a bite mark in it and it only had the one attempted bite. I think either the skins are too tough or they are just completely distasteful. Either way, I'm glad the critters don't bother the cuks. 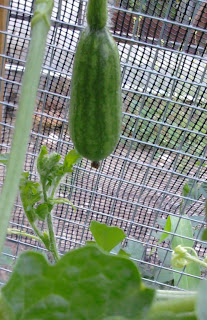 My one watermelon is growing rapidly. The picture makes it look bigger than it is. Right now it's about twice the size of an average peanut. It's the only fruit I've seen so far, but I'm sure there will be more between the 2 plants.
Posted by Tammy at 11:06 PM