While I was working in the garden yesterday, Clara was in and out of the nesting box several times, often sitting in it for a bit of time. All the while, she was making quite a ruckus. I thought for sure we would have an egg, but by nightfall, there was no egg and she took to roosting as usual. 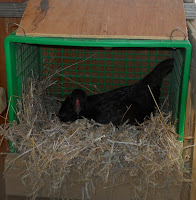 Today, while in the garden again, Clara began making long and repeated squawking sounds. I just thought she was mad at someone or was being bossy (she's the Queen hen). But not long after that began, I came out to see that she had laid our first egg! Such a proud moment... 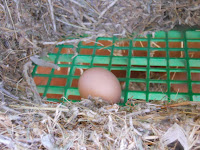 The nesting box is a milk crate and seemed to be a good size. Except for the fact that Clara kept scratching the hay in the box and it kept falling through the holes in the bottom, it worked great. So shortly after she laid that egg I made a quick modification to the nesting box and inserted a piece of wood into the bottom of the box under the hay. Hopefully when they're scratching around to rearrange the hay next time, it will work out better and whoever it is won't be sitting on the bottom of the box but on a nice soft pile of hay.
Posted by Tammy at 7:00 PM