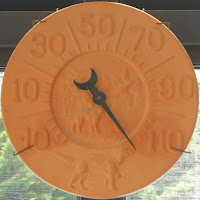 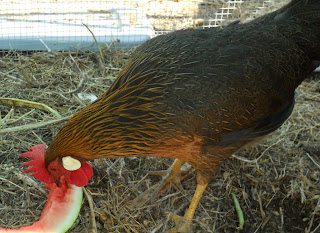 So what do you do in the summertime when the sun is blazing hot? You eat ice cold watermelon and play in the sprinkler! The girls LOVE the watermelon. They plunge their beaks in so hard that juice squirts up everywhere. All that's left of the watermelon after they've finished is the very leathery part of the outer rind. It looks like a fruit rollup.
A couple of times a day I go out and hose down their pen and give them an opportunity to play in the sprinklers. Funny thing about chickens is... they don’t really much like the sprinkler while it's running. In fact, they immediately head into the henhouse to wait until it stops. I've tried setting it to "mist". They're still not interested. But after after it’s turned off they shoot back outside to scratch around in the nice cool, damp ground.