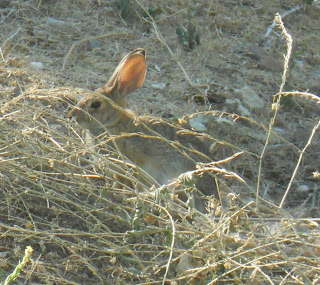 For the last 2 days, the bunnies have been especially brave. Perhaps it's the heatwave that's completely fried their little bunny brains so that they aren't thinking straight. Or maybe they've just finally realized that I won't, under any circumstance, be chasing them UP a hill! These photos are closeups as far as wild, hillside bunnies go. At any given point there were 3-4 of them hanging out on the hillside. They were between 15 and 30 feet from me. Today I brought out apple skins and tossed them up the hill to them. They came down and had a snack while I worked the garden. 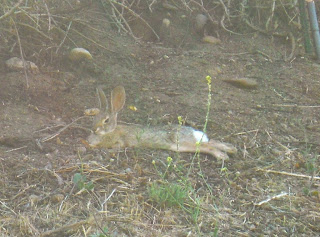 The one laying down was definitely lounging. In the photo he looks pretty aggravated that I had the audacity to take his photo (repeatedly). But he didn't get up to leave. He alternated between rolling around in the dirt, stretching out on his belly, and getting up for the occasional nibble on something. But mostly, he just lounged.

God did a good job making them blend into the hillside. When they sit still you can't even tell they are there. They are often so hard to see. Though I do have to wonder what purpose the white tail and backside serve. Maybe it's so they can find each other??

I saw a hawk patrolling the back hill this morning. I'm glad to see him and hope he focuses on the rats and mice. The hawks are just one of the reasons I have the chicken coop locked down so tightly.
Posted by Tammy at 12:03 AM