A Bounty of Goodness in Progress 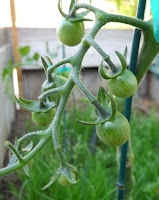 We have lots of veggie babies... The first tomatoes showed up on one of the "volunteer" tomatoes I found in the jasmine planter. I replanted it into the empty planter which quickly filled up with grass that looks more plush than our lawn! I haven't been able to weed the grass fast enough. It just keeps overtaking the planter and I've pretty much resigned myself to the fact that the tomatoes and beans are going to have to compete for food and water on their own. So far, the tomatoes are winning. 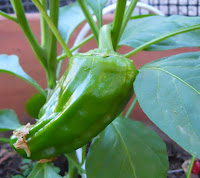 There are 4 wine barrel planters of red and yellow bell peppers. The first pepper showed up last week. Two of the containers were attacked by rabbits or rodents who proceeded to gnaw off the tops of the plants as they were budding! I was NOT happy. Joe helped me cover them with bird netting and plastic hardware cloth. Thankfully, they are recovering nicely and starting to bloom again. 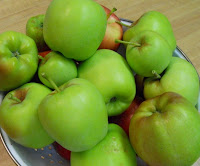 We also covered the area with the grapes, apples, and plums with bird netting. Next we need to install the chicken wire around the bottom to fully secure the perimeter from rabbits sneaking in below the netting! 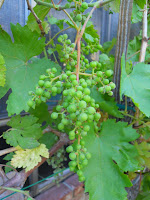 The apples have begun to ripen and I've harvested the first batch. Only the green ones in the photo are from our tree (the red ones are from the store). The grapes are progressing nicely, but won't be ready for harvest for several weeks. These will eventually turn a deep red. 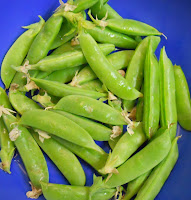 I harvested the first sizable batch of snow peas this week. It was about a 1/2 pound. They passed the Joe test and never made it to the stove to be cooked. All were enjoyed fresh off the vine. Now I hear he's been sneaking out to the garden and harvesting them... I mean, eating them straight from the vine! That's why I planted them. I knew he loved them fresh.
Posted by Tammy at 8:31 PM 2 comments:

It is my first time growing broccoli. I really had no idea what to expect. I started them from seeds then transplanted the sickly looking seedlings into composted cow manure, prayed over them, watered them, and picked off any misguided bugs or worms that thought they looked like a free buffet! 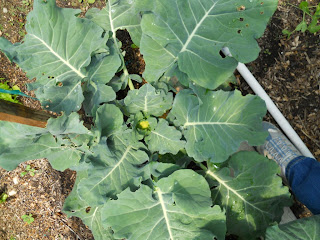 From seedling to harvest was almost exactly 60 days, just like the seed packet said. I'm stunned at how fast they grow.
I took the first photo on June 2nd and harvested only 12 days later! 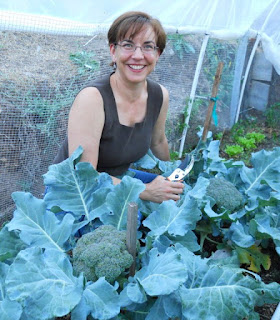 These plants are HUGE! The leaves are beautiful and I wondered what in the world I was going to do with them after I harvested. It seemed a shame to toss out so much remaining plant. But I found recipes to use the leaves. They said they cooked up like cabbage. So I tried it with the first harvest. They were right! Delicious! We'll be eating the whole plant now, not just the florets. Excellent! 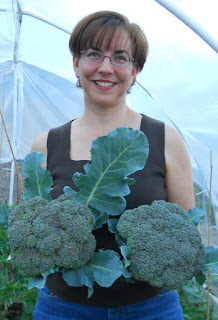 Other gardeners in the area told me it was too hot to grow broccoli. I guess they should have said that to the broccoli! I only planted 4 plants this year because I wasn't sure how they'd do. I'm glad I didn't plant more because they do take up alot of garden space. But if I expand the garden, I'll make more room for these guys and plant them in succession since they grow so quickly.
Posted by Tammy at 8:12 PM 3 comments:

There's been a whole lot of shrill cheeping outside throughout the day. After a couple of scouting expeditions I finally tracked down the source. 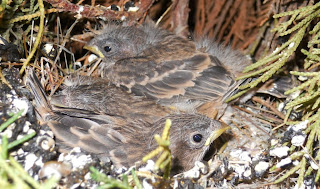 It's another Mockingbird nest. There are 3 babies in here (one of them got spooked when I peaked in and hopped out of sight). They have feathers on their wings and are pretty active but not going far from the edge of the nest right now. I especially like the fuzzy little feathers on their heads. This photo was taken almost a week ago. A couple of days later, the fuzzy head feathers were already gone. They grow up so fast!

There are two adult Mockingbirds tending to their every demand. I read that the male Mockingbird helps with the nesting and child rearing process. So sweet and helpful!
Posted by Tammy at 10:11 PM No comments:

Of Wading Ponds and Pecking Orders

The weather has turned just plain HOT over the last week. The girls spend the hottest part of the day in their coop where it's shady and a "cool" 95 degrees! The sit on the bedding at the bottom with their wings spread out a bit to allow for air flow. Once the sun goes over the hill, they're back out digging around until the sun goes down. 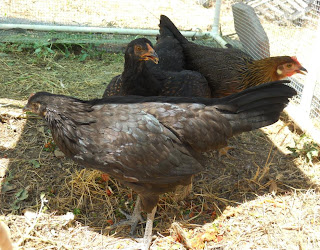 I tried putting out a pie tin of ice water for them as a "wading pond". I read on one of the chicken keeping sites that this was something that might help. Well, Ingrid came running out of the coop like she'd been shot out of a cannon (one of the other girls probably spooked her) and she inadvertently ran right into the "pond".  As soon as one of her little chicken toes hit that cool water she squawked and jumped backward! I came out a couple of hours later and the entire tin was upside down on the ground. Knowing my hens the way I do, I suspect it happened something like this...
Petunia (the brave one) decided to check out the pond more closely. She pecked at it a bit and poked at a few of the floating ice cubes. Once it was deemed relatively safe, Ruby decided to stake her claim on it and stepped up on the edge of the pie tin, which promptly flipped up, hitting Ruby in the face and dumping the water all over her. I'm sure this caused quite a ruckus in the pen. I wish I had had my camera setup for that one.
I noticed a couple of weeks ago that both Clara and Petunia were becoming more standoffish toward me. I guess this must officially be the "teenage years" as far as hens go. The girls have gotten quite feisty over the last week and I'm pretty sure they're working out the pecking order.  I see Ingrid spending quite a bit more time on a roost during the day watching Petunia, Clara, and Ruby chasing each other over who's going to get what piece of straw. 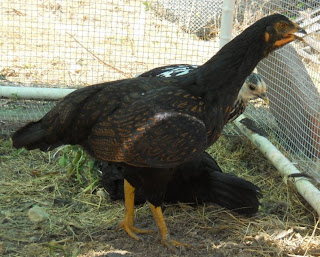 The other morning we heard a very loud and very distinct squawk. When I went to open the hen house, Ruby was bleeding just above the beak (they must heal quickly because it was no longer visible that afternoon). Later in the evening as they're getting ready to roost, Petunia is stepping on Ingrid to get to the other side of the roost and Clara is pecking everyone's feet to have the roost to herself!! Clara is significantly larger than all of the others and I suspect she'll be "top hen". But Ruby and Petunia are standing their ground. Time will tell!
Posted by Tammy at 11:05 PM 1 comment: