The garden is growing beautifully! 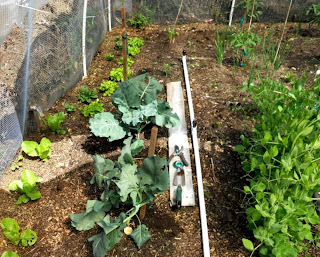 I harvested a 1/2 pound of lettuce and at least a cup of spinach over the weekend. I wasn't really sure the spinach would grow out here. It looked a little spindly when I planted it and it seemed to need an enormous amount of water. It didn't start out well in the ground looking more like a vine than a bunch of spinach. So I decided to bury all but the top of the plant. That did it! It took off and started producing big, beautiful deep green leaves. 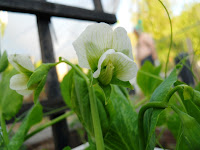 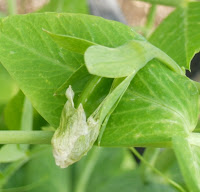 The peas started to bloom a week or so ago. The blooms remind me of tiny prairie bonnets. Now I can see baby pea pods peeking out from underneath what used to be the blooms. I'm not sure exactly how many pea plants there are, but they are all entwined together. I love their little curly cue tendrils! 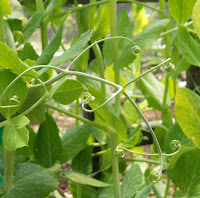 The big plants down the center of the top garden photo are my first attempts at growing broccoli. The leaves were getting holes and started to look pretty bad. At first I thought either the rabbits or rats were getting in somewhere, but after I secured the perimeter it continued to happen. I found a slug close by (which Clara enjoyed for breakfast) and assumed that was problem. I put out capfuls of beer but the problem continued to worsen. Almost one entire plant was missing and the other was looking pretty raggedy! Closer inspection showed groups of tiny white eggs here and there on the underside of some of the leaves (you can see in the photo how a big chunk of the leaf is missing). 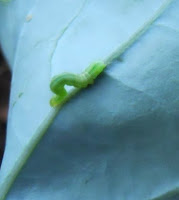 And then I found it! A couple of tiny green caterpillars! It's hard to believe something so small could do so much damage. Each was no bigger around than a toothpick and no longer than an inch and a half. An internet search shows that they are Cabbage Butterflies. Ruby was happy to gobble up both green monsters. I have since seen a white butterfly near the garden (which I promptly caught and gave to Petunia for her afternoon snack). My broccolis have recovered and are flourishing. I didn't realize that they needed to be staked to keep them off the ground, so their stalks are a little crooked, but they are now staked, worm and egg free, and growing exponentially!
The pots of carrots and beets growing inside the sunroom are doing great! I pulled a carrot the other day to see if it was harvest time yet. They are definitely edible now, but not as big as I'd like them to be. So I'm going to give them a few more weeks before harvesting.