Funny thing about chickens... they go into a VERY deep sleep. And even though all their little heads pop up and turn around to look at me when I go out late at night to check on them, I don't think they're really awake. They're actually in a zombie-like trance. How do I know this, you ask?? Because I didn't want to leave them all lined up along the edge of the roofline (2 nights in a row now) to be punctured by coyote fangs or some other carnivorous creature, so I opened the door and picked them up one by one and placed them on the roost where they spent the rest of the night.

I left Ingrid till last because she's the squawker. She watched me move each of them one by one and when I picked her up she hardly made a sound or protest (very unlike her, she usually runs to the other side of the house whenever I open the door). They're definitely zombies! Which also tells me they are sitting ducks (chickens) when they're asleep at night, so we have to make sure they're protected from teeth.

Here's a photo of them lined up on the ledge (before the move) from inside the henhouse (Ingrid was on the other side), though not nearly as dramatic as the red glowing image from the outside (wish I had a camera and skill to capture that!) I have no idea how they all get up there without knocking each other down... 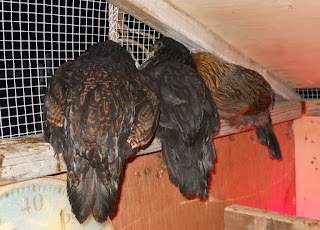 Now if they're on the roofline again tonight, I'll assume chickens don't easily forget traumatic events... which means you have to be careful not to traumatize your chickens!
Can't you just imagine what they're thinking after going to sleep on the ledge and waking up on the roost?!? "Hey Ruby, how'd we get over here?" "I don't know, I don't remember a thing after the cloud covered the moon." "Hey Petunia, do you know what happened?" "I think I blacked out. I ate too many earwigs and slugs yesterday."
Posted by Tammy at 10:01 PM