No more chickens on the edge

Today I installed the new "ledge abatement system" around the roof edge. After the sun went down and they were all in the henhouse, that's when the noise began! I could here them squawking and cheeping and cackling and wings flapping from the back porch!

Petunia was determined to find space on the ledge that she could hang onto. That was not working out well, hence all the flapping and squawking. Clara and Ruby were not very happy about it either. The kept trying to edge each other out of one specific space on the 4 foot long roost (there's PLENTY of room for all of them). Sweet little Ingrid was on the roost as far away from the other 3 as possible. I put Petunia on the roost and she calmed down for about a minute. Then she started trying to step over and onto Ruby and Clara to try to get to the no-longer-existent ledge! They finally had enough of that and knocked her off the roost.

Petunia shook it off and immediately flew back onto the roost. What ensued can best be described by the first 50 seconds of this Pixar cartoon short video "For the Birds". There was a whole lotta pushing and shoving and jockeying for the best pole position. They finally did settle down, as you can see. Note: Ingrid is still in the exact same position she was when all the hubbub began... 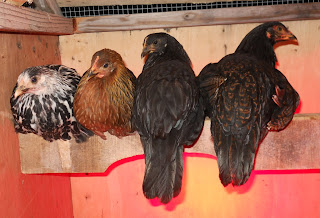