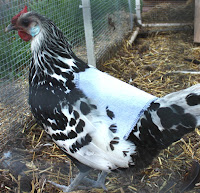 I honestly never thought I'd be saying these words, but, yes, my chicken is wearing a dress. It just didn't seem to matter how much protein I supplemented or moved the girls around or put them out to range in the garden, poor little Ingrid still kept taking a beating. So I made her what some call a "chicken saddle" or "chicken apron". It still looks like a dress to me. She wasn't too happy about it either. Ingid doesn't like to be handled AT ALL for any reason. So you can just imagine how this went!

After seriously inspecting herself she picked at it for a while, then seemed to settle in. I checked on her every few hours to make sure none of the others were trying to "steal" her dress (right, like that was going to happen!) I really just wanted to make sure she wasn't tangled up in it in the corner somewhere with Petunia standing on top of her! Fortunately, that did not happen. 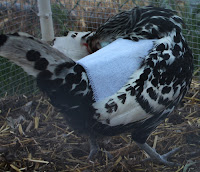 However, I did come out to find her completely free of the dress. I can only imagine that someone must have been standing on her back (yes, they do that) and/or picking on her and grabbing at it for her to be able to slip out of it. Naturally, I redressed her.
I also took the opportunity to Vasaline the sides of her head which had also been subjected to a slight plucking by some "mean girl". I glopped it on as suggested on one of the chicken help sites and then smoothed the feathers over the bald spots to cover. The chicken site said that the other girls don't like the taste and feel of Vasaline (who does?!) so they'll stop picking if the keep getting that goop in their beaks. As you can see in the pictures, it looks like she has gel in her hair and it's sticking straight up! I'm assuming someone got a beak full of Vasaline... 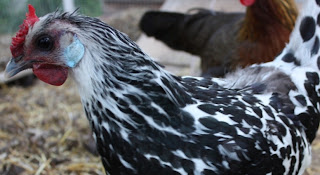 She's covered and protected... for now.
Posted by Tammy at 11:08 PM No comments:

Well, so much for my chicken divider! The little buggars could see that lone broccoli seedling and found a way to the other side. The seedling didn't stand a chance! By the time I realized they were out, they had already completely turned the entire other side of the garden. On the bright side, none of the weed sprouts stood a chance either. They picked that garden clean.

I wasn't sure if any of the green pea seeds were left uneaten after their romp on the "other side", but over the last couple of days I've seen a couple of seeds start to sprout. I'll probably lay out a few more just for good measure.

Over the weekend, I planted 2 more broccoli sprouts and re-fortified the dividing fence. We'll see how that works out. I'll keep you posted.
Posted by Tammy at 10:36 PM No comments:

Here in Southern California we had a couple of warm weeks at the end of January. It's hard to have such nice weather and an empty garden and although we usually have frost well into March (and often April!), I decided to experiment and set out some cool weather seedlings to see how things went.

I did the garden prep and setup a fence inside the garden area so that the chickens could still come in and tend the unplanted side of the garden.

The first weekend in February, I put out 4-5 broccoli seedlings and 2 rows of sweet pea seed. The next weekend we had a pretty hard frost. Two of the broccoli did NOT look well. This week we had a hard freeze (I'm down to one thriving broccoli seedling now) and are expecting snow again this weekend! 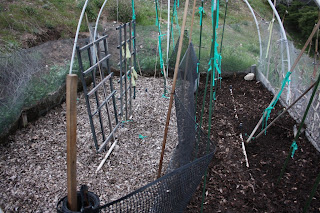 If you've ever wondered about the many benefits of chicken-keeping, take a look at my garden. The left side is the planted side of the garden. If you squint really hard might be able to see (actually.. probably not) my lone surviving broccoli seedling at the far end of the garden. The right side is what the garden looks like after the chickens have been taking care of business for only an hour! Every thing's been turned just beautifully. And my girls with their muddy feet and beaks are fat and happy with their worm and bug dinner delights!
Posted by Tammy at 9:13 PM No comments: 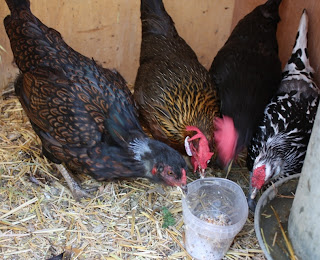 Well, it's not really a treat. They just love it so much that they think it is! It's oatmeal, almond meal, and sunflower seeds with a 1/2 banana. Clara (the brown one below) is molting (again!) and I've been noticing some broken off feathers on a couple of the others (you can see the patch of missing feathers on Ingrid's back below). I suspect foul play (no pun intended!) So I decided to supplement with added protein. 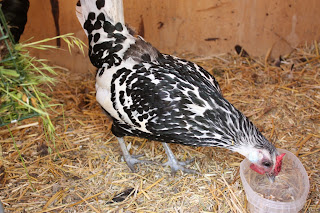 When I put out the container of oatmeal, they plunge their beaks into it and then wipe the excess off in the hay. Yeah, that works out real well! It looks like they have hay whiskers! You can kind of see the hay whiskers on Clara below, which they proceed to then eat off of each other. Very funny! 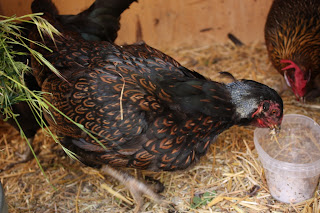 I didn't think chickens have tongues, but from the looks of how clean they get the bottom of the container, I could be mistaken. I'll keep an eye out for that and keep you posted!
Posted by Tammy at 11:42 AM No comments:

My trusty neighbor, Ed, found a big cat print yesterday up the hill from the chicken coop about 10 yards or so. We had a big rain last week, so the ground was good and mushy, otherwise I doubt there would have been any evidence that this big cat was prowling around. Normally our hill is like concrete! Ed, being the good neighbor that he is, took a cast of the print (that thought would never have crossed my mind, and I certainly would not have happened to have any plaster of paris laying around to accomplish the task had the thought occurred!) 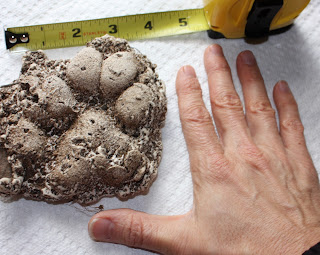 As you can see, this was a BIG animal. There were no prints any closer to the hen house. I'm sure I would have seen them if there were. The ground was soggy for days and it would have been easy to spot. I'm thinking my coyote deterrent CD is also a good "big cat" deterrent. One can hope!
Posted by Tammy at 1:31 PM No comments:

I wasn't sure if it would happen, but it did. 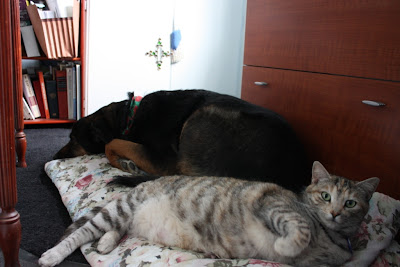 Cutie is mostly an indoor dog. Alice is mostly an outdoor cat. Occasionally they are either both inside or outside. Alice has become quite curious about Cutie, but Cutie always just walks away (after a couple of scary hissing incidents when she tried to approach Alice). 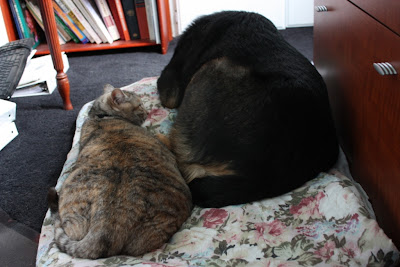 Today, Alice came in and laid right next to Cutie on Cutie's bed. Alice instantly started purring. Cutie started a low, rumbling growl. I guess maybe she thought Alice was growling at her! I "explained" the situation to Cutie and they've been fine ever since. At one point, Alice was even laying across Cutie's legs. How sweet...
Posted by Tammy at 9:54 PM 3 comments:

Not just the first snow this winter... the first snow since I've lived in this house, and we've lived here 10 years! Southern California is not known for precipitation of any kind and certainly not snowfall (Remember the song, "It Never Rains in California"? It's pretty much true!) 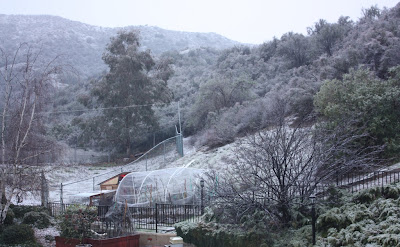 We had never seen the back hill covered in snow. After 2 hours of snowfall, it looked quite surreal.

But what a difference a day makes. The snow turned to rain overnight and washed most of the snow away. Today, just 24 hours later, we are back to the normal as if it never happened. 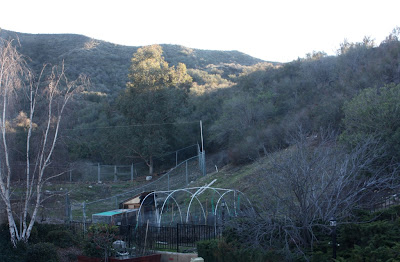